In order to win the Chinese publishers’ trust and join the ‎International ‎Union of the Silk Road, four Iranian publishers have taken ‎steps to ‎negotiate and sign an agreement with a Chinese academic ‎publisher. ‎
Iranian publishers to join Silk Road Union‏ ‏
According to IBNA correspondent, four active Iranian ‎publishers in the fields of traditional medicine, theater, academic books and ‎fiction could communicate with a Chinese academic publisher through Iranian Tamass Literary Agency, and discuss ‎basic ways of cooperation. ‎

Poriya Nickbakht, literature department director of ‎Noda publishing active in the field of theater and one of the publishers who has begun to negotiate with ‎China Renmin University Press said: “In 2017, a play was ‎staged in Shanghai, China, where discussions began.”‎

Referring to the formation of this relationship, he ‎said: “Hamid-Reza Naeimi’s book has played an important role. The ‎book that China Renmin University Press offered us contains three ‎works, ‘Carnival Bakhtin’, ‘Svejk’, and ‘Richard’. To coordinate with this ‎work, Hamid-Reza Naeimi collected three works, ‘Socrates, Richard and ‎Svejk, the Good Soldier’ in a collection entitled, Happiness and ‎Sorrow.”‎

“We are planning to ‎continue this collaboration at the Fajr International Theater Festival. Throughout the world, the book is ‎known as a cultural commodity, and through that, it communicates with ‎other countries,” Nickbakht added. ‎

Seyyed Hossein Abedini, a director of Safir Ardehal Publishing, is ‎another publisher who has partnered with China Renmin University ‎Press.

He said: “I have previously participated in ‎foreign fairs, including Frankfurt Book Fair. I have realized that communication with foreign publishers ‎has its own conditions. Due to this reason, through Tamass Literary Agency, Safir Ardehal Publication has been enabled to ‎establish a better connection to the publishers of other countries’.” ‎

He stated: “With the help of Tamass Literary Agency, two ‎books on Chinese culture and custom have been introduced to this ‎publication. Iran has yet to join the Berne Convention for the Protection of Literary and Artistic Works. So, Iranian publishers do not obtain copyright in ‎translating and publishing foreign works. For this reason, there are steps to be taken to ‎build trust between the Iranian and Chinese publishers.”‎

About measures to improve relations among publishers in ‎China and Iran, Abedini said: “China has founded a union which ‎is called the Silk Road. This union is recruiting members from countries in the Silk Road zone. We carry out our activities and try to introduce ourselves to the world.”

“China Renmin University Press is engaged in the ‎promotion of Chinese culture and custom. We are trying to ‎publish our books in China because China is a large country with a high ‎population, if it only uses books for its institutions, it will cover a large ‎number of books,”
He added.‎

On the introduction of two books translated in this publishing institute, the ‎director of Safir-e Ardehal Publishing stated: “The books about religious ‎practices, music and cultural traditions in China are going to be printed. ‎We are also negotiating to publish a book on the environment.”‎

Grant Plan fees are not enough

She said that, “Howze Noghre Publication translated this Chinese ‎book from English to Persian. The financial support ‎received through the Grant of China for publishing this book were not ‎enough for the cost of paper and zinc in Iran, but cooperation between Iran and China was very ‎pleasant.” ‎

“As a matter of fact, since the majority of Iranian publishers ‎do not obtain copyrights in publishing foreign books translated into Persian, many countries in the world do not sign agreements with us ‎because of the economic sanctions.”‎

The director of Howz-e Noghre Publishing expressed regret: “Our Publishing House has not been able to obtain copyright of all ‎foreign books that has published. By acquiring copyrights, we will see an increase in ‎the price of books, but it is important that if any publisher continues ‎such a process, other publishers will be encouraged to do that little by ‎little.”‎

Importance of communication with a Reputable ‎Chinese Publisher

Hadi Tale Khorsand, a director of Khorsandi ‎Publishing House, siad: “For this publication, cooperation ‎with foreign publishers is very significant. That’s why ‎we maintained contact with Tamass literary Agency, and by means of ‎this agency, we knew China Renmin University Press. The ‎head of this university is responsible for managing the Silk Road ‎Publishers.

He argued: “These actions are just the initial steps in joining ‎Berne Convention and negotiations have been conducted ‎to exchange the copyright of two books.”
‎ ‎
Additionally, Khorsand pointed out: “Khorsandi Publishing House ‎is connected with three vice presidents of the judicature, universities ‎and vice presidency. Actually, the connection ‎with a reputable Chinese publisher was very important to us.”‎

Renmin University, the Major Initiator and supplier of the ‎Silk Road Union

Renmin University Press is the largest Chinese academic publication ‎that has translated its books into 27 languages and has more than two ‎million students. In addition to being active in publishing academic books, ‎it’s a supplier of “One Belt and One Road. This publication participated at ‎Tehran International Book Fair with the president of China Renmin University Press Mr. Li ‎Yongqiang; chairman ‎of the Council, B and R Publishing cooperative Mr. Wang Lei; director ‎of the editorial management office Mr. Sun Binghen; sales manager ‎Ms. Wu Miao, English-Chinese translator and rights manager, and ‎Ms. Yolanda Liu, a director of the publishing center of the ‎International Collaboration at Renmin University Press of China in attendance.”‎
‎ ‎ 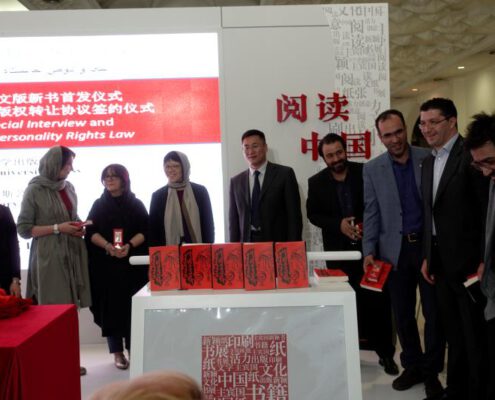 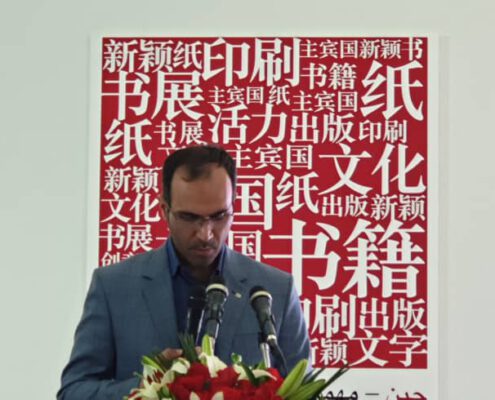 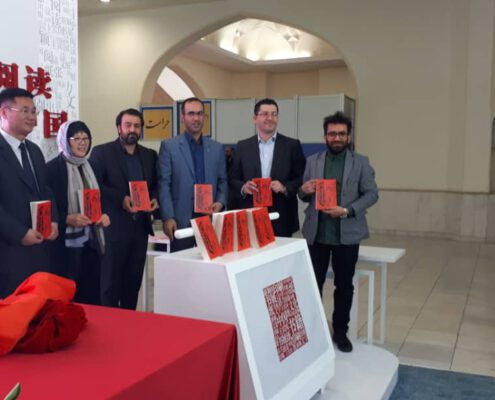